Seaford’s Focus on Economic Development and Collaborations with Sussex County

According to Mayor David Genshaw, each of Seaford’s elected officials and employees share a common goal: the city’s economic development. This collective attention along with new collaborations with Sussex County are creating job opportunities in Southern Delaware.

“The culture in Seaford is really focused on how we grow business here,” the mayor said. “We’re getting everybody pulling in the same direction.”

Genshaw, who has been mayor since 2013, moved to Seaford as a child in the 1970s when DuPont was the city’s major employer and the city thrived as the “Nylon Capital of the World.” He’s been working with city council and personnel, such as economic development and community relations director Trisha Newcomer and city manager Charles D. Anderson, for the last eight years to improve the economic climate so that locating and growing in Seaford appeals to developers, businesses and workers alike. 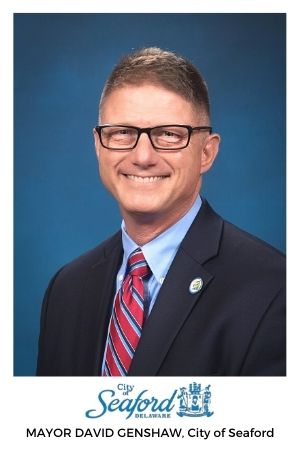 “I’m old enough to remember when DuPont was here in its prime and what good-paying jobs means to a town, what it means to the school district, to shopping and retail, to churches,” Genshaw said. “All ships rise with the tide.”

And Seaford’s tide, which fell with the exit of DuPont, has been rising again. For example, Genshaw said, Starbucks, Chick-fil-A and McDonald’s all have new or newly revamped sites within the city. Though “not big job creators” individually, he said, the commitment these national powerhouses have made to Seaford speak to the city’s revitalization and progress in recent years.

Also in progress is the Western Sussex Sewer District that Seaford is working on with Sussex County. This project will connect Greenwood’s and Bridgeville’s sewers to Seaford’s, which will provide city utility services to farmland currently without them. As a result, property in those areas will be ripe for development.

“There’s some really great foundational things happening in Seaford that I believe are going to set us up for extended-year growth,” Genshaw said. “So this is an exciting time.”

Another foundational project launching in Seaford is Western Sussex Business Campus, which aims to bring dozens of new jobs to the city and surrounding areas. Seaford, Sussex County, the State of Delaware and a private developer are partnering on the proposed complex, which will bring commercial, industrial and manufacturing activity to more than 100 acres on the city’s northern edge. This property lies off Herring Run and Ross Station roads adjacent to the Ross Mansion historical site and near both Seaford Industrial Park and Ross Business Park.

The city and county are jointly funding infrastructure improvements to the property that will allow companies to locate there and bring increased property values and additional economic effects along with jobs. Seaford owns the land and has allotted $600,000 for its development, having received $350,000 in State Bond Bill funding in 2019 to begin engineering design and implementation of utilities and a commercial entrance. Sussex County has pledged up to $1.88 million toward the project.

The private developer, which Genshaw declined to name until final details are worked out, has signed a letter of intent to buy about half the acreage and construct a 50,000-square-foot commercial building – amounting to an overall investment on its part of $4 million to $5 million. The developer would then market the site to prospective tenants.

“Our vision for this park is really a mixed use of medium-sized companies and small companies with the opportunity to move to larger spaces within the park as their business grows,” Genshaw said. “A diverse group of businesses from distribution to manufacturing to everything in between would be our best opportunity for success and job growth.”

Having owned the property since the 1990s, Seaford previously tried to sell the land in its undeveloped state. More recently, the city listed it with a commercial real estate agent. Neither effort succeeded as demand for raw land had plummeted. Today, developers increasingly want shovel-ready sites so they can significantly reduce time between start of construction and open of business.

“They’re also looking for a government – whether that’s local or county or state – that isn’t going to make it hard on them and is going to work alongside them,” Genshaw noted. “We really want to create that kind of atmosphere when someone deals with us. We’re really thankful and grateful that they’re considering our town and our state, so we try to treat them that way.”

The Western Sussex Business Campus project aligns with strategies in Sussex County’s 2018 Comprehensive Plan that call for exploration of public-private partnerships to develop new business ventures within the county. It also stands as a prime example of collaboration over competition in the effort to advance economic development opportunities in and around Seaford.

“For a long time, business came natural to Seaford because DuPont was here and things kind of just rolled into place,” Genshaw said. “Now, we need jobs, so every interaction we have has got to be focused on keeping businesses here and growing additional business.

“We’ve got a lot more to do, but some really positive things are going on and we have momentum on our side.”