“I had steel-toed boots when I was very young,” Peggy Del Fabbro said about her early exposure to M. Davis & Sons Inc., one of the leading industrial and construction contractors in Delaware, where she has been CEO for over a decade.

Del Fabbro was born and raised in Wilmington, attending Brandywine High School and graduating from the University of Delaware with a degree in business. “M. Davis has been in my family for five generations. I grew up hearing all of the stories. My dad would take me out to job sites as a kid. It’s been part of my entire life.”

As a kid, spending time with her father at the paper mills where M. Davis worked projects gave Del Fabbro a unique perspective. “A lot of people really don’t see how things are actually made. It’s incredible to see water and either pulp from a tree or cotton rags becoming paper. And then seeing things like cups being made at Sweetheart Cup in Baltimore from the flat materials in the press.”

But Del Fabbro wanted to be a veterinarian, with her strong love of animals since she was a child. “High school chemistry defeated me, so I was lucky to have a strength in accounting, which I enjoyed and was exposed to in our business.”

Delfabbro Fearless in the Face of Challenge

Del Fabbro took over the role of CEO in 2008, just as the economy went into a deep recession. She considers it the biggest highlight of her M. Davis career so far. “I look back at that time and realize that I had the guts to make it through that. How at that time our sales were $41 million and now we’re over $80 million. But that said, it’s not all about me, and I did not accomplish that alone.”

Del Fabbro holds elements of M. Davis’ history as part of what guided her through that challenging period. “I was aware of our experience (with economic challenges) in the past, and looked closely at what helped us. It isn’t that sophisticated and really is about knowing where you stand.” Knowing where they stand was effectively a combination of controlling costs and having difficult conversations about what was and what was not working at the time. “The sooner we could identify where something wasn’t working, the sooner we could act and make better decisions, and that is still my overarching approach today,” Del Fabbro says.

While dealing with the challenges of 2008, Delfabbro became certified by the Women’s Business Enterprise National Council (WBENC), which opened up a lot of doors for M. Davis.

“It helped the company, but it also helped me to grow as an owner of the business. Learning from other women who own businesses is just invaluable. A lot of those women had the guts to start those businesses from scratch, and what I’ve learned from them has been so beneficial. And how they have reached out and had us work together during this pandemic has been critical.”

Beyond the direct assistance Del Fabbro has received from WBENC, it has also affected her ability to connect with existing clients and attract new ones. “Every market I serve is there. It was almost overwhelming to prepare for meetings because it was so wide. So I have a color-coded spreadsheet for that, of course.” Relationships made at WBENC have helped introduce Del Fabbro to other female leaders in traditionally male-dominated industries.

Del Fabbro’s leadership strategy is concise, but not simple. “I appreciate the people that I work with, and I strive to put them in a position where they can be successful. If I can do that, the company will be successful. My style is common sense and down to earth, if the message gets convoluted it often gets misunderstood.”

“I am always looking for continuous improvement. The moment I think, ‘We’re good,’ is when I know we are in trouble.” Del Fabbro finds communication to be one of her biggest challenges since the company is so physically spread out. “With all of our recent growth, I find myself constantly looking at areas we need to improve or make more efficient or safer.”

M. Davis’ management of the COVID pandemic has been informed both by the challenges of 2008 as well as helped by the strategies she’s put into place since then. “We were hit really hard back in March, and I look at the workload we have now and think this is really good, but it’s still a problem.” Every week in the M. Davis newsletter Del Fabbro reminds her team of what it will take to maintain the workload in the midst of a pandemic. “Safety is the biggest threat to our workload, period.”

Providing Hands-On Experience to Students that Lead to Careers

M. Davis’ strong connection to students interested in trades has been uniquely successful in the last two decades.

“Years ago we realized there would be a shortage of people working in construction.” At that point, M. Davis had established relationships with the vocational-technical school districts in Delaware, Maryland and New Jersey, where they could find students interested in the trades.

“We brought in students to co-op in their senior year to get hands-on experience. Those kids could then come out of high school, and if they liked the experience they had at M. Davis, they could find themselves with a full-time job, with benefits and no student debt, and then also continue on in the Delaware Apprenticeship Program with whom we have a strong relationship,” Del Fabbro says.

“After three to four years with us, they end up with their Journeyman Papers (a certification of completed training as an apprentice), which is just as valuable as a college degree. In some cases more valuable as they don’t have the debt. Earn while you learn.”

College, Del Fabbro says, is not for everybody. “Kids that like to work with their hands, or even on computers and automation, can find perfect spots in companies like ours. We need to change the perception of these jobs, these careers.” 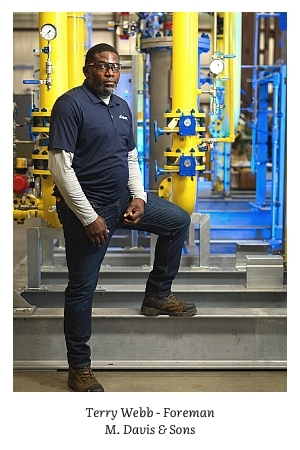 Terry Webb and the Path to Leadership at M. Davis

Terry Webb created a 19-year career at M. Davis by starting with an apprenticeship. After graduating from Delcastle Technical High School in Wilmington, Webb took a position at M. Davis that immediately connected him to the Delaware Apprenticeship Program. “I knew it was a pathway for me because the education leads to Journeyman Papers that I will have with me for life.” Webb is now a foreman at the company.

Webb has graduated from State of Delaware apprenticeship programs in sheet metal, electrical, HVAC and plumbing.

“The apprenticeship programs that I graduated from really expanded my knowledge in that trade, along with the working hours I had to graduate. While the classes were technical and not focused on leadership, I found that having more knowledge and education put me on the path to leadership at M. Davis & Sons.”

When asked, “Why Delaware?” Del Fabbro immediately says, “Why not?”

“I always say, it’s two hours from everywhere. It’s easy to ship globally from here, which is critical for us. It’s a great location to springboard from. The weather can be challenging but, knock on wood, we don’t have too many extremes.”

M. Davis’ recent cooling tower project for DuPont is an example of why Delaware and Delaware relationships work well for M. Davis.

“We told them up front that we believed we might have a better way, a safer way with better quality, a shorter timeline and, by the way, would save money. Because they know us and trust us, they were willing to take that risk. For me, that is the perfect situation.”

When asked about another Delaware business that inspired her, Del Fabbro is quick to mention Dogfish. “That’s an easy one. I love them. We’ve worked with them close to 15 years. They are a family business and a nationally recognized brand, but they have not really changed who they are.”

M. Davis is a classic Delaware company that leads from the idea that “knowing where you come from” and honoring the relationships and skills developed from this leads to success. From a childhood of watching her family navigate M. Davis through many of the larger corporations in the area, to the challenge of leading a company in a male-dominated industry, Del Fabbro has taken the business where she came from and amplified its success.