Delaware acted as a launch pad for Patient Sortal – a revolutionary healthcare data management company – in two important ways. First, founder Kenny Eck discovered the need for the company while working with 1,500 Delawareans with chronic conditions. Second, the University of Delaware’s Horn Entrepreneurship program connected Eck to a network of experts who helped him craft and ultimately launch the service.

Eck, who originally enrolled in UD’s graduate program in kinesiology and applied physiology, says he began to see the need for Patient Sortal during his coursework.

“I worked with each of these 1,500 patients for hours, built friendships with them and became a part of their lives,” he said. “Understanding the problems they encountered during their healthcare journey was something that mattered to me. One problem that stuck out was the management of the health information between patients and their care providers.”

This realization propelled him to go back to school again and obtain a second graduate degree. Attending UD’s Lerner College of Business with a focus in entrepreneurship and design, he aimed to launch a solution to the issues he had identified. Through his involvement in Horn Entrepreneurship, he started putting flesh to the bones of his ideas.

“The Horn program took my ideas and incubated them to fruition,” said Eck. “They have done an excellent job finding subject matter experts, entrepreneurs and brilliant minds to fill the walls of the Venture Development Center. This has built the ideal environment for turning solutions to problems into businesses. I came to Delaware to fast-track my education but stayed here because it is a state where you can learn from the best scientists, innovate within some of the best healthcare systems, learn from entrepreneurs with invaluable knowledge and be a part of a community where everyone is connected and wants to help one another.”

Design and Launch of Patient Sortal

In 2018, while earning a stipend to work on his project, Eck designed Patient Sortal, tightened his pitch and built a network of business contacts. Using what Eck calls “care and information mapping,” Patient Sortal was built to help a given patient’s care team quickly assess important records and data that is shared across. providers. Eck says the company’s value comes by acting as a conduit rather than a portal. He’s able to integrate his solution into existing systems rather than introducing new infrastructure.

In 2019, his proposed project placed in the Hen Hatch competition. Since then, Patient Sortal has launched and is in aggressive pursuit of several markets.

“This environment is face-paced and chaotic – a child visits five to 20 care providers within a short period of time,” he said. “Keeping their information straight is necessary to provide a continuum of care. The problem we had was our business model.”

While Eck found the caregivers very receptive to his solution, Medicaid and children’s health insurers didn’t seem to share the sentiment. Eck decided that instead of taking his word for it, he needed to demonstrate the value of his solutions. This led him into a quite different market equally hungry for solutions: prisons.

“While incarcerated, inmates receive long-term care for medical, dental, mental health and substance abuse,” he said. “This includes assessments, medications, interventions, treatments and healthcare costs of up to $7.6 billion per year nationwide. This is paid for through government spending, the same budget Medicaid is derived from.”

“It cost Medicaid an additional $390 million for these 45,000 inmates because of duplicate assessments, appointments, medications, interventions and treatments,” said Eck. “These services were already paid for during incarceration, but due to ineffective transitions of care from prisons to community providers, this information was lost and duplicate services had to be completed. This is where Patient Sortal will step in to streamline these transitions, improve continuity of care, improve public safety and decrease health-related recidivism rates.”

Eck has an ambitious mission to take the work of our federal prisons’ Health Services Division and continue interventions post-discharge. One of the biggest disconnects is the sharing of health informatics from prisons to community providers in an easy, quick and secure manner pre-, during and post-discharge, he said. Within two years, Eck plans to be fully implemented within the Department of Justice’s Bureau of Prisons to serve their 110 facilities and 170,000 inmates.

“Currently, we have two employees, one intern and a four-member advisory board,” he said. “In 2021, we plan on bringing in 26 employees to fully implement our solutions within the federal government and pursue other state government agencies.” 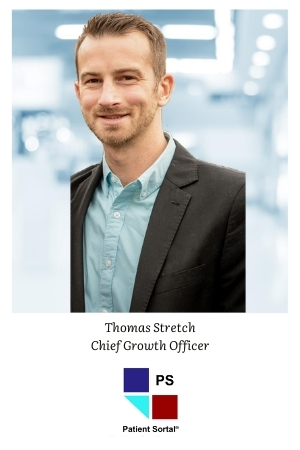 Already making some high-value additions to the team, Eck brought Tommy Stretch on as the firm’s chief growth officer about eight months ago. The Delaware native and registered nurse specializes in implementation of health information technology. Having intimate, on-the-ground interactions with the current technology, Stretch knows the benefit a platform like Patient Sortal can bring to the healthcare industry.

Within five years, Eck believes his solution could be implemented in 60% of America’s state prison systems.

“Within 10 years, I believe Patient Sortal will be offering solutions within most health systems, removing the faxing of health information completely,” he said. “We hope to improve the lives of many, from those entering society as they leave the criminal justice system all the way back to our primary goal: helping children during their healthcare journey.”