Succeeds by Sticking to its Core Values

Nathanial Hagedorn was an energetic entrepreneur in 2012 when he founded NorthPoint Development in Kansas City, Missouri. In short order, the management team moved to the fast lane.

Between mid-June 2015 and mid-June 2020, the privately held real estate development firm built more industrial space than any other developer nationwide, according to Real Capital Analytics.

“It’s pretty unbelievable,” says Brent Miles, chief marketing officer and a founding partner. “We started with one building, and now we own about 76 million square feet across the country.”

The firm owes its achievements to its culture, Miles maintains.

“We live by our core values,” he says. “Anything can happen when you do the right thing and empower your people.”

The company motto is “Beyond the Contract” as NorthPoint is dedicated to honoring relationships and employing the Golden Rule. But NorthPoint’s growth also comes from the ability to spot trends and develop in strategic locations, including Delaware.

The Delaware Logistics Center is currently under construction near Delaware City. Dart Container Corp — the Michigan-based manufacturer of the famous Solo cup — is moving East Coast distribution to the site.

NorthPoint Moving in the Right Direction

NorthPoint, which is the fastest-growing industrial development firm in the nation, primarily owns the structures that it builds. “We have a long-term view of real estate,” Miles explains.

To realize that vision, the firm applies an engineering, technical and data-driven approach to development. Employees include data scientists, as well as civil, geotechnical, electrical, industrial and computer engineers.

It’s not unusual for NorthPoint to purchase sites requiring environmental remediation, as long as they meet the company’s layout, logistics and labor requirements. “We have a park that’s going to have a couple thousand employees,” Miles notes. “Will our tenants be able to hire people?”

For instance, although a portion of the 190-acre parcel NorthPoint bought near Delaware City in 2019 had been occupied by Stauffer Chemical, this location offers quick access to major transportation arteries and is within minutes from Philadelphia, Maryland and New Jersey. As a result, tenants will have access to a ready talent pool.

NorthPoint, which is new to Delaware, also wants sites that can accommodate the center’s planned layout. The company wants to feel welcomed as well.

“It’s been a great experience right off the bat (in Delaware),” he says, noting that the state’s small size has been an advantage. NorthPoint is a hands-on company, he adds, and the Delaware decisionmakers involved in development have the same attribute.

Keeping a Keen Eye on the Market 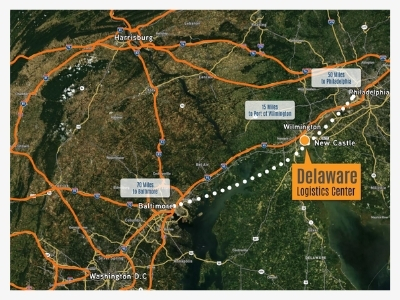 The Delaware Logistics Center represents a trend in industrial development driven by ecommerce. Admittedly, the momentum began before the coronavirus pandemic. But the need has only increased as more consumers shop online during virus-related shutdowns.

Before the pandemic, ecommerce and traditional companies followed the just-in-time system, which limits the amount of capital invested in warehoused goods and supplies. According to Miles, that’s changing.

“I would say the just-in-time approach is going to be replaced by just-in-case,” he says.

The need for a streamlined, accessible pipeline may increase domestic manufacturing, he says. “We haven’t seen it yet, but that’s the conversation we’re having in industrial real estate.”

NorthPoint is nearing the completion of one building, and it is going forward with another so that a tenant could move in by Jan. 1, 2021. Tenants can customize the space themselves in the future should the need arise.

Miles says industrial development and redevelopment will continue to rise. “You’ll see less demand for retail and a transition to industrial overall,” he says. “That’s the way people are shopping.”

The Delaware Logistics Center will help NorthPoint meet that need.

“We’re proud of our investment in Delaware,” Miles says, “and we think it will be really successful.”