What started as a one-man business inside a small backyard garage almost 30 years ago has grown into one of Delaware’s leading manufacturers, Miller Metal Fabrication.

Miller’s privately-owned regional metal fabrication company struggled during its first 15 years of operations. Then Martin W. Miller, founder and owner of Miller Metal, decided to embrace change and expand, he began using the latest state-of-the-art technology. Business took off. The company now employs nearly 100 people and offers a full array of manufacturing services for its diversified client base. Despite its size, Miller Metal has a substantive manufacturing presence in the Mid-Atlantic, where it services local, regional, national, and several international clients in a variety of industries.

Miller Metal now holds a unique position in its industry as a full-service metal fabrication company. Unlike most metal fabricators, Miller Metal provides “turn-key” solutions for its customers, as it designs, cuts, bends, welds, assembles, and ships a wide range of metal components. Serving a large and diverse number of customers throughout the United States, the company specializes in highly sophisticated laser cutting, machining, forming, design engineering, welding, and assembly services. 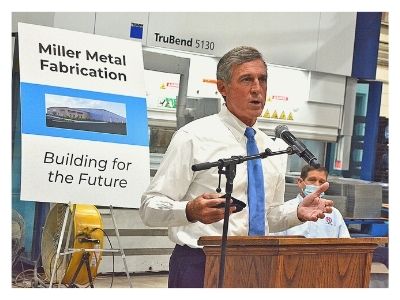 During a ceremony held Monday, October 18, 2021, at his facility, Miller, along with his CFO Mike Elehwany and Delaware Governor John Carney announced the metal fabrication company’s next major expansion. Located in the Newton Business Park, just west of Route 13 on Route 404 in Western Sussex County, Miller Metal plans to build a 60,000-square-foot industrial /office building on 8.5 acres of land adjacent to its current leased facility. The company plans to bring the total number of employees to 117 within three years.

“Miller Metal Fabrication’s decision to expand their operations and build a new facility in Bridgeville is great news for Sussex County and for Delaware,” said Governor John Carney. “This expansion will create new jobs, and it reaffirms that Delaware is the ideal place for businesses to grow.”

Miller Metal Fabrication is investing almost $7 million in its new facility, including acquisition, construction, and fit-out costs. Supporting the company’s plans are grants it has been approved to receive from the Delaware Strategic Fund by the State Council on Development Finance: a Jobs Performance Grant of $57,350 and a Capital Expenditure Grant of $207,900. Miller Metal previously received a Delaware Transportation Infrastructure Investment Fund Grant of $313,000 toward the construction of a new Route 404 entrance to the Newton Business Park, which facilitates future development by other businesses there as well.

Over the Years, the Company Has Experienced a Series of Expansions.

In 1993, Miller left his original backyard shop for a larger space in Harrington. Soon after, Miller Metal teamed up with Delaware-based material handling solutions company, O.A. Newton & Son., to co-exist at Newton’s headquarters site in Bridgeville in Sussex County. In 2014, Miller Metal added a machine shop to its operation, where it has several high-tech milling machines. That same year, the metal fabrication company started a rubber and hose division, the Delmarva Rubber Company, at its Bridgeville location. Delmarva Rubber provides specialty rubber, gasket and hose products to the agriculture, manufacturing, public safety, chemical and food processing industries.

Currently, the company has more than 60 advanced pieces of equipment. It also has one of the largest press brakes on the East Coast.

“Sussex County is excited at the prospect of adding better-paying jobs, thanks to Miller Metal Fabrication’s expansion plans and the approval of these grants,” said Sussex County Council President Michael H. Vincent. “Sussex County has a robust manufacturing sector, one that is thriving with many small and mid-size businesses. This funding will ensure another local company stays hard at work creating products that we can proudly say are made . . . right here in Sussex County.”

Despite its success, Miller Metal stays true to its roots.

“My employees are the key to our success,” said Miller during the announcement ceremony. “Every one of them views the company as their own, and they take genuine pride in the fact that our success is largely due to their commitment to customer satisfaction.”