Gaming Their Way to Prosperity

If Stephen Sye, CEO of Futures First Gaming, has his way, his company will have planted the seed that germinates the entire Delmarva region esports industry. Esports, or electronic sports, is a style of competitive sports played through the medium of video games – particularly multiplayer games played by professionals as individuals or part of a team.

“We’re a STEM.org Accredited™ esports and educational organization focused on growing and cultivating the esports community and industry in the region,” said Sye. “With the exception of the University of Delaware, the state itself has only a small underground scene right now as it relates to gaming culture – especially in comparison to other places like Philadelphia, Washington, D.C., and New York City.”

The organization, which launched last February, is taking several approaches to its mission simultaneously. Futures First Gaming’s business model rests on four pillars, said Sye. The first is to advocate growth in the state’s existing esports industry, the second is to personally host competitive and recreational events to create opportunities for involvement, the third is to hold educational programs focusing on workforce development and the fourth is to work with schools and universities to launch their own esports teams to engage in tournaments. 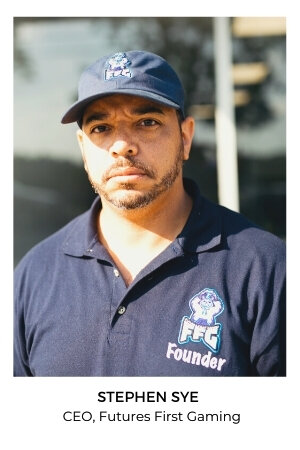 Though their goals are ambitious, Sye believes now, more than ever, is the time for this effort. Gaming has long suffered from a perception problem – but that’s on the cusp of changing in a big way, he says.

“For a long time, a good portion of the population has felt that playing video games is a waste of time, but this industry is growing by leaps and bounds, and the opportunities for lucrative careers and entrepreneurship are growing every year,” said Sye. “Look at it this way: There was a League of Legends Championship in 2018 that had more than 200 million viewers tune in. That was more viewership than the Super Bowl, NBA finals, and Major League Baseball game seven had that year combined. There are gaming events in this space that are selling out venues like the Staples Center in 12 minutes.”

Perhaps a function of changing tastes, it’s been long predicted that esports will supplant traditional sports in popularity. Sye says that ever since the onset of the COVID-19 pandemic, the time window in which this was expected to happen has shortened.

“Viewership of esports was already expected to eclipse that of traditional sports by 2022 – but now with COVID limiting audiences and introducing a lot of unknowns in terms of schedule, esports has a huge advantage,” he said. “Esports is projected to be a $300 billion global industry by 2025. That’s huge. And it comes with an enormous amount of opportunity and career pathways.”

Hoping to nurture the next generation’s desire to enter the esports industry, Sye said, the company held its inaugural Futures First Camp this past summer.

“It was a virtual summer camp this year, but it was 100 hours total,” said Sye. “Our Futures First Program focuses on esports, coding, gamin, and entrepreneurship. Over four weeks, our team worked with students from 8th to 12th grade for five hours per day. Two hours were devoted to coding and game design – with the help of our partners Coderrific Academy and Code Differently. Then there was one hour for entrepreneurship where we covered things like starting a business, marketing, promoting, starting a website, esport monetization, and live streaming. Then, the last two hours were basically gameplay. Gamers worked on communication, teamwork, strategy, and gaming skills development.”

There were 10 graduating students in the first class over the summer. Sye said it was a great proof of concept. The class’s final project was evidence of that.

“Over the last two weeks, the campers were tasked with a hands-on collaborative project to produce and host their own online esports event,” he said. “They hosted a Brawlhalla  tournament and ended up having great participation, and the event was flawless – it was an awesome learning experience.”

Futures First Gaming will be bringing the program back next summer and will shoot for an even larger class. But Sye hopes to push the program as a regular course in local high and middle schools to expose students to the available career paths.

“We’ll really be able to educate students on the possibilities if we can meet them where they are,” he said. “We have commitment from two Delaware school districts pending funding and have had conversations about our program with Departments of Education in several states.”

Although not an exclusive organization, a fundamental goal of Futures First Gaming is to help expose minority students to the prospect of a career in the gaming industry, noted Sye.

“Looking at the landscape, 83% of Black teens game, but only about 9% of STEM (science, technology, engineering, and math) professionals are Black,” said Sye. “We really want to change that. We feel that the discrepancy exists because of a lack of awareness and opportunity. Our program works to correct this by reaching out to students through their interest in gaming but teaching them about the business side in the process. That way, they can imagine a future where they make a living doing what they love. In our concept of STEM, ‘E’ stands for entrepreneurship.”

To support this goal, Futures First Gaming has started to reach out to HBCUs (historically Black colleges and universities) to assist them in launching their own competitive esports teams. Sye is a strong believer that the opportunities in esports will continue to proliferate and offer opportunities to people of all kinds of backgrounds and interests.

“There really is a spiderweb of careers cropping up to support gaming,” he said. “For example, last year’s Fortnite world cup winner, a 16-year-old named Kyle Giersdorf, won $3 million. He’s a millionaire now. He’s going to need an esports-specific attorney. There are gaming companies that want to create game characters with his likeness and image, so he needs to negotiate that. He’ll need an accountant. He’ll even need a personal trainer to work on stamina and hand-eye coordination. The web of opportunity keeps spreading.”

“That’s why when students come to us, we can work on where their interests lie and steer them toward a great career opportunity.”