World War II pilot Lt. Maxwell Honemond was in extreme danger as he flew his small, fabric-covered L-4 airplane over enemy lines. A well-aimed shot from an anti-aircraft gun would have brought him down in flames. Armed with only a primitive radio and .38 pistol, his job as an artillery spotter was to help finetune the artillery commander’s aim in real-time during bombardment. Who would have thought his career as a heroic aviator began at a humble college in Dover, Delaware?

Honemond, a Black pilot, began training to be a pilot at what was then called the State College for Colored Students in the late 1930s. In the 1940s, the United States Department of War consolidated some of its pilot training efforts to Tuskegee University in Alabama. Honemond went on to become one of the fabled Tuskegee Airmen. Although the DSU Aviation Program went through a number of changes throughout the decades, turning out top-level pilots is a proud tradition it carries on to this day. 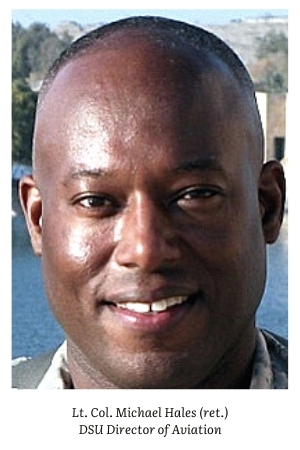 “He raised money, got donations and found some way to get aircraft,” said Hales. “Back then, he started with what we like to call the ‘magnificent seven’ students. Over the years, we kept building on our successes and morphed into what we are today. I’m proud to say that last fall we had 91 professional pilot majors and 36 students focusing on aviation management. We’re on course for even more growth this fall.”

It’s not just the number of students that’s increased. The number of aircraft owned by DSU Aviation has ballooned to 22 in recent years. So many, in fact, that they’ve outgrown the hangar in Delaware Airpark in Cheswold.

“We were one of the first historically Black colleges and universities (HBCUs) to own its own fleet of aircraft, and now we’ve become by far the largest,” Hales noted.

Any program that’s thrived over decades will have faced its fair of trying times. However, DSU’s aviation program faces one of its most serious hurdles yet in the form of an economy reeling from COVID-19.

“Pre-COVID, we used to brag that 100 percent of our pilots are flying ‘right seat’ as a first officer at a regional airline within 12 months of graduation,” said Hales. “There was such a pilot shortage that you could almost hear a sucking sound as our graduates were scooped up by the industry.”

At the onset of the COVID-19 pandemic, though, the bottom fell out. Since then, the commercial airline industry has shifted to trying to keep its current pilots rather than hire new ones.

Although the future of the industry remains unclear, he finds plenty of reason for optimism. 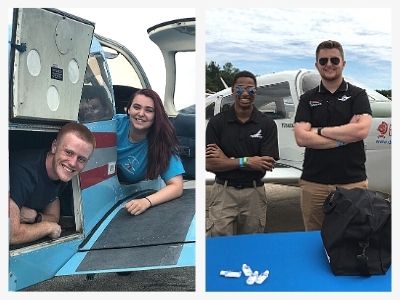 “I would strongly encourage anyone interested in aviation to stay with it,” he said. “In some

ways, there is opportunity in crisis. Cargo flights with FedEx, UPS and DHL aren’t having any issues. Those jobs were very competitive already, but there is also the military option. The U.S. military’s demand for pilots hasn’t diminished, and there are a lot of benefits in going that route, considering various scholarships and incentives.”

Hales said the shift in commercial travel has even made charter flights more competitive.

“The charter side of things is doing quite well,” he said. “For folks with a fair amount of money who still need to travel, some operators are making it very inexpensive to fill seats. They’re priced close to first class flights now. With that comes more demand for charter pilots. Either way, we will get through this. We’re hearing from the commercial airline industry that there is a pause on hiring right now, but things will pick back up, and they’ll start hiring again once it does.”

Although Delaware State University is “open to all,” Hales noted that graduating minorities and students from underserved or underprivileged backgrounds is something they take particular pride in. On average, a graduating class consists of about half minority students.

“It’s a big deal,” Hales said. “An ROTC scholarship will now help pay the flight lab fees for HBCU students. These fees can be a big obstacle for underserved populations, so this really helps increase accessibility.”

However, when it comes to outreach, few activities are more important to Hales than his “discovery flights.” As one of the only aviation programs in a 150-mile radius, he believes the DSU program may be the only contact many locals ever have with the prospect of becoming a pilot.

“It’s so important for us to expose a potential student to aviation in any way, shape or form,” he added. “Especially with minority students, many will have never even learned enough about the field in the first place to opt out – many don’t realize that it might be an option for them.”

By taking kids, some as young as middle school-aged, up for a discovery flight in a small airplane, Hales believes he’s helping to “plant the seeds” of aviation in the next generation.

“We’re trying to capture their imagination early and show them what’s possible,” he said. “Get in touch with us or email us at aviation@desu.edu, and we’ll take you up for a flight.”