Dover AFB Innovation Efforts Will Take Off with Expanded Lab

Bedrock has been operating with four founding members since January 2019, with successes that include creating 3D-printed masks for distribution across the base; 3D-printing door handles to reduce the spread of COVID-19; and improving traffic flow at the base’s main gate.

“We had a proposed contract that would have cost taxpayers $123,000, but a collaboration between our team and base security professionals and engineers enabled us to find an alternative that only cost $3,000,” said Capt. Ryan Nichol, the base’s chief innovation officer who oversees the Bedrock program and also serves as a flight instructor on the base. 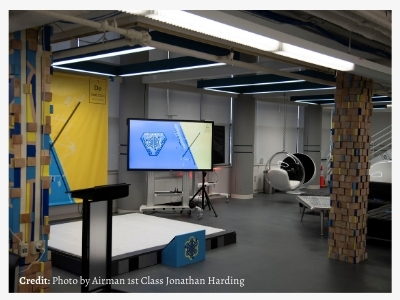 “The Air Force is getting back to its roots when it comes to innovation,” he said. “We encourage failure, push the boundaries and come up with visionary solutions.”

Nichol said the jewel of the new facility is the coworking space that comprises about two-thirds of the 5,000-square-foot building. Other features include an event stage; a virtual reality classroom; a podcast studio that has already recorded 20 episodes of The Bedrock Podcast; and a prototyping lab with the aforementioned 3D-printers.

Bedrock also has a four-month internship program to teach airmen innovation skills they can take back to their units or into the community after they leave the service. Bedrock is comprised entirely of volunteers from every group on base who are committed to improving processes and solving problems.

“Ten to 20 years from now, I believe we’ll realize that something special was born here today,” said Col. Matthew Jones, commander of the 436th Airlift Wing during a Sept. 23 ribbon-cutting ceremony. “We must accelerate change because losing is not an option.”

Jones was paraphrasing Bedrock’s founding principle of “Accelerate Change or Lose,” which was coined by Air Force Chief of Staff Gen. Charles Q. Brown Jr. and is on the new building. 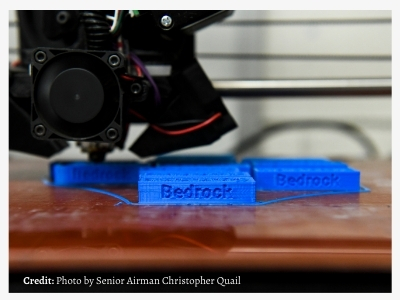 Rob Nicholson of the Delaware Department of Technology and Information (and a Navy Reservist) sees the state acting as a “matchmaker” to encourage on-base and off-base engagement with organizations that have existing solutions or want to test solutions that will help Dover AFB and other Air Force facilities be more efficient, Nicholson said.

“There’s been a major drive by the military services to look for innovation at the local level, to engage service members, universities and local businesses to develop strategic partnerships at the base level, which benefits our national security objectives. Bedrock is one of those programs that the state is aligning with to engage the community, participate in collaborative initiatives and help secure project funding.”

One key is obtaining funding from the federal SBIR program, a highly competitive program that encourages domestic small businesses to engage in federal research and research and development (R&D) that has the potential for commercialization. Through a competitive awards-based program, SBIR enables small businesses to explore their technological potential and provides the incentive to profit from its commercialization. By including qualified small businesses in the nation’s R&D arena, high-tech innovation is stimulated, and the United States gains entrepreneurial spirit as it meets its specific research and development needs.

“Any commander [at Dover Air Force Base] can sign a Memorandum of Understanding detailing interest in working with an SBIR company. If selected for contract, we are able to team with the company to tackle a specific problem set [with SBIR funding],” Nichol said. “Dover currently has one for a virtual reality egress simulator, but we’re looking for more.”

The Bedrock initiative targets more sophisticated research and is designed to move from idea to operationalization, both Nichol and Nicholson agreed.

The efforts at Dover Air Force Base are part of a broader USAF initiative called AFWERX, which is expanding technology, talent and transition partnerships for rapid and affordable commercial and military capability. Bedrock is part of AFWERX’s Spark Initiative, which connects Air Force personnel to commercial innovators using virtual collaboration, immersive training and networking opportunities that inspire ideas and cultivate a creative Force. AFWERX sees itself as the Air Force’s community of innovators, connecting airmen with the resources required to transform their ideas into reality, according to its social media platforms.

Chartered in 2016, Spark is an Air Force-level grassroots program modeled to bridge the challenges of rapid innovation at the unit level while navigating the administrative hurdles of compliance that often impede the velocity of change. In January 2019, Dover chartered its own Spark hub with the creation of Bedrock.

One success of the Spark initiative can be found at the Open Innovation Campus in Rome, New York, a new $12 million technology research partnership between the Air Force Research Laboratory, the Griffiss Institute and SUNY Polytechnic Institute that will help solve complex computing problems for the Air Force by linking researchers from government, industry and academia on the site of the former Griffiss Air Force Base that closed in 1995 and is now owned by the local county.

“We could potentially develop an off-base manufacturing innovation lab that is open to the public but influenced by base needs over the next five years [like the one in Rome],” Nicholson said.