All Aboard! The Award-Winning Delmarva Central Railroad Company is on the Move

Railroads are an integral part of the Delaware landscape. They parallel Interstate 95 and the Delaware River, curve through neighborhoods and add fun ambiance to alfresco dining in Trolley Square, a popular Wilmington community.

Businesspeople and leisure travelers depend on the Joseph R. Biden Jr. Railroad Station on the Wilmington Riverfront. There, they board Amtrak trains heading to Philadelphia, New York or Washington, D.C.

Running through all three of Delaware’s counties and into Maryland, the railroads also are the state’s economic arteries. The Delmarva Central Railroad (DCR) is a prime example.

The subsidiary of Carload Express Inc. now operates 188 miles of line in Delaware, Maryland and Virginia. DCR also has a direct connection to the North American network through Norfolk Southern Railway. In May, the American Short Line and Regional Railroad Association recognized DCR with an award for outstanding business development activities designed to grow the short line railroad business.

The Long and Short of It

“Our vision starts with taking assets that are underperforming — or maybe a little neglected — and investing in them to bring them back to their former glory,” said Cliff Grunstra, chief marketing officer for DCR, which is based in Harrington, Delaware. 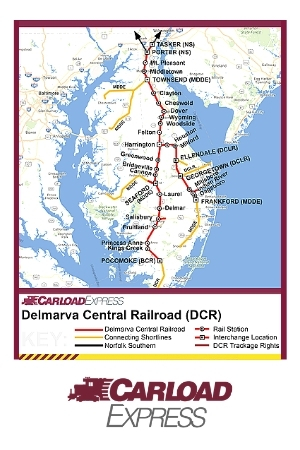 Carload Express saw the potential for a line on the Delmarva Peninsula, which is technically an island thanks to the Chesapeake & Delaware Canal.

“Delmarva lends itself well to rail transportation,” Grunstra said. “It’s also close to major consumer markets: Norfolk and Hampton Roads, D.C. and Baltimore, Wilmington, Philadelphia and New York. Delaware is a great place from which to serve these locations.”

In 2016, DCR took over the Norfolk Southern-owned railway from Porter, Delaware, to Pocomoke, Maryland, and from Harrington to Frankford. In 2018, the company added the track from Pocomoke to Hallwood, Virginia, and in 2019, the Delaware lines from Ellendale to Milton and Georgetown to Harbeson joined the railroad.

“The goal of a short line railroad is to be customer-focused and respond to customer needs,” he said. “Once we have the railcars, we want to get them to our customers as quickly as possible.”

DCR’s primary commodities include stone and aggregate for home and road construction and propane, which fuels many homes in southern Delaware. Given that the Delmarva Peninsula is home to the broiler chicken industry, it also hauls agricultural products.

Because DCR customers are essential businesses, Grunstra said, the COVID-19 pandemic hasn’t dramatically affected 2020 projections. In early spring, however, the railroad did see a downturn in dried distiller grain shipments.

“That line of the business largely dried up for three or four months,” Grunstra said. “We’re seeing it pick back up again.”

Why ship these items by rail rather than by road? Efficiency for one. Rails can move a ton of freight roughly 500 miles on one gallon of fuel, Grunstra said.

“Rather than lots of rubber on the pavement, you have a small section of steel wheels touching a small section of the steel rail,” he explained. “That exponentially reduces the friction and, subsequently, the amount of energy needed to move the freight. It’s a much greener way to transport bulk materials great distances, and you can move a huge amount of material at a reduced cost.”

Convenience is another reason to ship via Delmarva Central Railroad. In most cases, DCR delivers the railcars directly to facilities on customer sidings — offshoots from the main rail. For instance, DCR rolls cars right up to a poultry processor’s feed mill five or six days a week.

“You still get those economies of scale,” Grunstra noted.

There is a transload terminal in Gravel Hill, between Harbeson and Georgetown. In 2019, DCR opened the Seaford Transload Terminal in Seaford Industrial Park to serve customers that previously trucked liquid feed ingredients from outside Delmarva. To accommodate the terminal’s first customer, a roadway was constructed next to the existing rail siding to facilitate direct railcar-to-truck transloading of the liquid.

A few months later, a piping-and-pump system was installed to allow DCR to unload railcars directly into two 30,000-gallon heated and insulated tanks, which were installed for a second customer. Due to the efficient infrastructure, trucks can fill up on demand and make deliveries to local customers.

Although known for its resort towns, the Delmarva Peninsula is still sprinkled with farms and cornfields. Grunstra, who grew up in Bristol, Virginia, appreciates the leisurely pace and friendly neighbors.

He and his wife, Sarah, who have four children, have lived in the Milton area for four years. The town, situated on the Broadkill River, is close enough to the beaches for the family to enjoy watersports.

“I love to fish,” noted Grunstra, who has a boat. “It’s my favorite hobby.”

He’s not far from several rails-to-trails, including the old Junction and Breakwater Railroad. But like the others on the DCR team, he’s determined to keep his company’s rails in full operation.

“We want to take these assets and pass them on to future generations — that’s the goal,” he said of the short lines. “Railroads are a vital part of our economy, and they are one of the reasons the U.S. developed into an economic powerhouse. Once those rails go away, they will never come back. So, it’s essential to maintain that infrastructure to allow our economy to grow and thrive.”