In 2021, following the year of the pandemic, one might have expected a short list of most innovative companies to have focused exclusively on COVID-19. But, in a year like no other we have experienced in our lifetimes, 60-plus-year-old W. L. Gore and Associates ranked second in Fast Company magazine’s 100 Best Workplaces for Innovators.

“Obviously, there’s a lot of pride,” says Anand Narayan, leader of Gore’s Innovation Center of Expertise (iCOE). “To be recognized for innovation, to be a place where innovators want to be, that’s really motivating.”

The center that Narayan leads was created over six years ago to counter a problem growing companies often face. When he arrived in 1994, the company had about 5,000 employees and annual revenues of $800 million. Today, there are about 11,000 employees and revenues are over $3.8 billion, with manufacturing sites in five countries and offices in 20 more.

“One of the challenges as you become bigger and bigger is that innovative practices can stall. We were still innovating, but a bit more cautiously,” Narayan says. “We needed a place where we can make bigger changes, take bigger chances. You need to be thinking about the next big thing in the spaces that you’re not in today.”

“One innovation can happen because you have one outstanding innovator,” Narayan explains, and that’s how Gore began its rise to prominence. But sustaining capability for innovation requires a supportive ecosystem, like the one Gore has created.

Founded in 1958 by the husband-and-wife team of Bill and Vieve Gore, the company initially served the electronic products market. Then, in 1969, their son Bob discovered expanded polytetrafluoroethylene (ePTFE), a versatile polymer that would have applications in medical, fabric, biotechnology, oil and gas, aerospace, semiconductor and many other industries.

But Bob Gore was not just an outstanding innovator. He and Bill Gore fostered an environment that attracted and grew other innovators. Over time, its Associates have been responsible for more than 3,400 unique inventions in a wide range of fields, including electronics, medical devices and polymer processing – putting the company, and Delaware, on the global map as a premier venue for innovation.

Gore built its success – and continues to do so, Narayan says – because of its ecosystem, one that is driven by advanced materials, a desire to solve challenging societal problems and a deep belief in the potential of every individual to make a difference. Gore has a flat management structure that some have called a “workers’ democracy.” There still are individuals in leadership roles and some Gore Associates are responsible for making executive decisions, but all Associates are empowered to sign on to projects that pique their interests, align with their capabilities and are supported with investment by businesses.

“The world is full of opportunities,” Narayan says. “Ideas can come from anywhere. The question is how to decide which opportunities to take on.”

He offers this example:

“Someone from our Fabrics team went to a conference on probiotics, and he heard about the need to improve seaweed production. He came to the iCOE and said, ‘I heard something at the conference that looks interesting. Maybe we could explore this further.’” 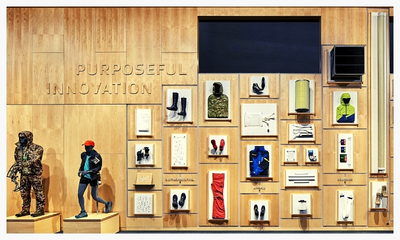 The Center paired a couple of Gore Associates with the Fabrics Associate – one from the business side, the other from the technical side. They looked more deeply into the idea and decided it was worth a try. Within months – and this was the blurb cited in the Fast Company listing – Gore had begun running commercial trials showing that their new process could improve yield by 40 percent in what is now a $16 billion global seaweed market.

“On the front end, it’s just a couple of people exploring,” Narayan says, and that exploration has several facets. Studying megatrends – climate change or population growth, for example – and brainstorming how the inventions of Gore Associates can be applied to solving some of the problems the megatrend presents is an important step in the process. “We look at market spaces that our divisions might not be involved in today, but where there could be a potential fit. Places where material science and technology can solve huge challenging problems in society are places where Gore is willing to take on high-risk opportunities.”

The preliminary research includes talking to current and prospective customers, for there’s little reason to proceed with developing a product that doesn’t solve a critical problem for potential customers. What the Associates learn from their exploration guides the Innovation Center in its decisions on whether to proceed, Narayan says. The end goal, he says, is “to make hard choices between good opportunities and great opportunities.”

Of course, in the world of science, success can never be a certainty. A rule of thumb in the profession, Narayan says, is that “only one out of 10 things you work on will probably be successful.”

Nonetheless, careful research within the iCOE has led Gore to continue its exploration of some high-risk opportunities.

Improving seaweed production is one example. So is the current work on creating an artificial cornea, a project now in its experimental stage in collaboration with the Johns Hopkins University School of Medicine in Baltimore. Damage to the cornea is the fifth-leading cause of blindness, according to a 2017 study, and successful development of an artificial cornea would reduce the need for cornea donations.

“If we’re successful, there’s a whole body of patients who are blind who would benefit,” Narayan said.

Delaware – the Ideal Location for Innovators

The collaboration with Johns Hopkins calls attention to another of Gore’s assets – its location in Delaware.

Not only is the state well-regarded for its business-friendly climate, but its central location on the northeast corridor facilitates collaborations with research institutions in Baltimore and points south, not to mention Philadelphia and other science hubs to the north. The location is also a boon for recruitment, with Gore regularly reaching south to schools like Virginia Tech as well as from the University of Delaware, practically around the corner from the company’s home base in Newark.

Delaware is also an ideal place for a company like Gore to grow.

“Our plants are not usually very big, and so we tend to build multiple plants,” Narayan says. “In Delaware there’s plenty of space for us.

“We’re far enough from the big-city hullabaloo, but we have access to everything we need.”