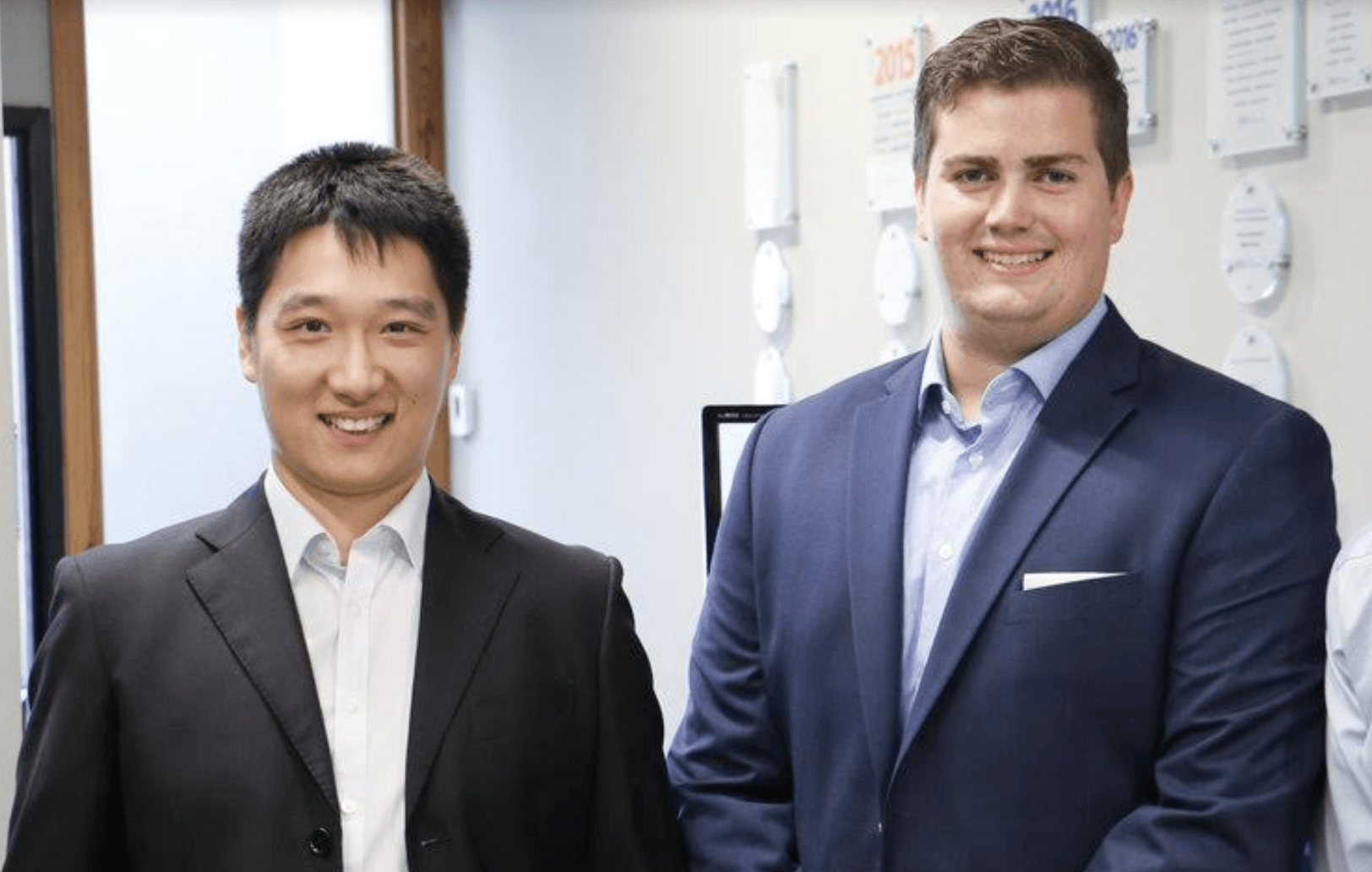 Few savvy investors trust their gut. Instead, they rely on sound research and experience. But what if there was an even better way to mitigate risk and increase the reward? That was the question that two University of Delaware graduate students set out to answer.

Anthony Rossi and Duanyi Wei were not in a business class, however. They were working side by side in the robotics lab when they wondered if they could apply some of the same principles to the financial world.

“Think of us as merging the world of robotics engineering and financial decision-making, if you will,” Rossi explains. “Essentially, we are creating the autopilot for asset management.”

If you’re picturing C-3PO, the droid from Star Wars, in a pinstripe suit, think again. The field of robotics involves more than hardware. Robots navigate around an uncertain environment, such as the moon’s surface. They need to “make decisions” when faced with obstacles, much like the mechanical systems on a commercial airliner make adjustments.

The partners wanted to create a platform that could evaluate risk and make choices in the potentially volatile financial market. “There’s no human emotion involved,” Wei says. “We factored out those distractions, so it’s consistent and systematic.”

In 2017, the partners started Lyapunov Technologies in honor of Russian mathematician Aleksandr Lyapunov whose work laid a foundation for risk management in robotics and inspired the duo to explore and create novel applications in the financial market. The fintech company is an example of a new wave in financial technology.

In the news, financial technology—or fintech for short—is often linked with blockchain or cryptocurrencies. But it’s much more, Rossi says. “There is a wide range of technologies—typically software-related—that streamline processes, improve existing financial services and, in some cases, create new markets.”

Rossi and Wei wanted to create one of those new markets. So, they did their research. At UD, Rossi got a Lerner MBA. Wei, who earned a Master of Science in mechanical engineering from UD, also audited business classes. They turned to UD’s Horn Entrepreneurship Venture Development Center and joined the Summer Founders program. They were also finalists in four pitch Competitions, including the Southeastern Hedge Fund Competition, where they won third place. (They beat teams from MIT and Duke.)

After graduating in 2018, the founders hit the ground running. Lyapunov Technologies, which is headquartered at 1313 Innovation in downtown Wilmington, has targeted hedge funds, banks and insurance companies. Retirement accounts and pension funds will be a main emphasis in the future.

The company is not focused on beating others to a hot investment. Instead, their unique engineering-derived approach seeks to make sound investment decisions  based on systematic risk management framework that has proven in other high-risk engineering applications. The platform, as a result of more than three years of research and development of the team, can not only make the decisions behind the scene, but it can automate and execute the orders. Next up: The founders will roll out a registered investment (RIA) and commodity trading advisory (CTA) business.

“We know from the ground up how all the technology works, so it’s easier to create value as a sub-advisor to others rather than licensing it,” Rossi says. The advisory division will have a different name than Lyapunov Technologies.

Fabulous for a Fintech Company

Rossi, a lifelong Delawarean, says the area has been a perfect incubator, and not only because of the University of Delaware’s resources. The partners appreciate the quality of life and Delaware’s proximity to mountains and oceans, as well as major urban hubs on the East Coast. Wei, who lived in Indiana while going to Purdue University, likes Delaware’s lack of a sales tax.

The state benefits a fintech business. “For fintech, you need to be able to pull the right resources together to navigate both the business and regulatory landscape,” Wei says. “Delaware is uniquely positioned to foster fintech innovation.  As a startup, we can get into rooms with state legislators and decision-makers relatively quickly. There’s a lot of agility when it comes to getting the right people together.”

Rossi believes that the fintech sector is still in the early stages. “There is a lot of opportunity to improve efficiencies and increase access, as well as create new markets and products,” he says. “There will likely be a lot of partnerships with fintech companies and large financial institutions. The large firms want to be a part of the up-and-coming technologies, and this can create excellent synergy between startups and financial institutions.”

In Delaware, Lyapunov Technologies is poised to capitalize on the trend. Says Rossi: “There is a tremendous pool of talent, ideas and world-renowned financial firms in the area.”