Emad Mohamed was traveling for work in the Philippines and Japan in late February, and as he returned in early March, his first priority was to talk to owner Bill Lo about the coronavirus.

“It was already a big deal there, and I knew this was going to be serious,” says Mohamed, executive vice president for Crystal Steel Fabricators, which has expanded from its headquarters in Delmar, Delaware, to five additional locations in Delaware, Pennsylvania, Maryland, Tennessee and Manila in the Philippines. “We immediately started daily meetings, closed the shop break room, sent crews to clean the common areas in each facility, segregated shifts (to clean between them), closed existing bathrooms and rented portable bathrooms to which staff members were assigned and limited movements between departments, all in an effort to minimize contact between employees.”

But Crystal Steel went even further. They checked temperatures daily; upgraded the existing time-clock phone application; bought lunch for everyone for three months; and made it clear that employees with symptoms or high temperatures should stay home. They even paid affected employees before the Small Business Administration’s Paycheck Protection Program loan was made available.

The result? Zero cases of COVID-19 at its Delmar and Federalsburg facilities since the pandemic started.

Crystal Steel furnishes and installs structural steel and miscellaneous metals to job sites up and down the East Coast and to parts of the Southeast. The types of projects it has worked on includes government buildings, medical facilities, education structures, historic renovations and sports venues.

Employees – the Primary Driver of Crystal Steel’s Growth and Success

Mohamed feels that Crystal Steel’s focus on its employees is the primary driver behind its growth and success. When he joined the 28-year-old family-owned business in 2006, it was doing about $15 million to $20 million in revenue. The company brought in $130 million last year, and Mohamed says they’re on pace to do $150 million this year, even with the challenges of the pandemic. 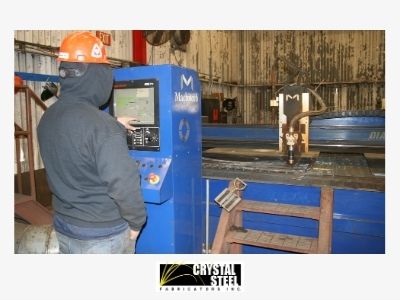 “We are using more technology, have started using robotics, and we hope to expand our second shift, but we’re being very careful with COVID and making sure we have the proper number of people working with a proper amount of spacing between them,” he said, adding that the company currently employs around 300 people with 75 of them in Delaware.

Even as it opens facilities in other places, Crystal Steel Fabricators says Delaware is home.

“This is a very friendly state, and political leaders and staff have been there over the years to help us,” says Mohamed. “There was a point when we needed more power, and the power company told us it would cost $120,000 to upgrade. Governor Markell visited us, made a call, and a year or so later we had the power we needed at no cost.”

Another visitor, U.S. Senator Chris Coons, stepped in a few years ago to urge the American embassy in Manila to issue visas so the company could train some of its Manila-based project managers. The embassy agreed, and about 15 employees have been able to visit Crystal Steel facilities to learn firsthand about the company’s U.S.-based manufacturing processes.

More recently, Crystal Steel partnered with a third party to develop LEAN manufacturing processes. This effort was aided by the Delaware Division of Small Business awarding a $72,000 grant to support the company’s investment of about $300,000.

“Success to me starts with people and safety, helping to give them the skills to have a career, not just a job,” Mohamed says. “When I see someone move from being a welder to foreman to plant manager and then to project manager, that feels like a personal success. We often hire people who have just been released from jail. We like to give them the opportunity to turn around their lives.”

A One-stop Shop for Structural Steel and Miscellaneous Metals

Bring When talking about the company’s projects, think in terms of “thousands of tons” of steel. Some of its recent projects include the Dulles Airport Metrorail for Bechtel, the Meritus Medical Center in Hagerstown, Maryland, that required 3,200 tons of steel, and the United States Tennis Association Grandstand and South Campus (1,600 tons) in Flushing Meadows, New York, where the U.S. Open is held.

“We are fortunate to have been able to participate in monumental projects, such as the Eisenhower Memorial in Washington, D.C., and ‘Empty Sky’ – the September 11 memorial in Jersey City, New Jersey – that will last hundreds of years,” Mohamed adds.

Each project offers a unique challenge in terms of the intricacy of the work. Mohamed likes to say simply that Crystal Steel does complex projects due to diverse capabilities.

“What differentiates us is that we’re a one-stop shop for structural steel and miscellaneous metals,” he says. “Most of our competitors do either or. We have a large in-house engineering team that offers services that others normally sub out. And we have enough people that we offer the capacity to be consistent and react very quickly to fast-track jobs. We do the very complex jobs that often scare other fabricators away.”

Closer to home, Crystal Steel worked on the new $314 million Bayhealth Medical Center in Milford, supplying 3,000 tons of steel and participating in an increasingly popular process called integrated project delivery (IPD), in which the designer, builder and major subcontractors work closely together from the outset. They share the same contract, and, if they deliver a project under budget, they all share some of the savings.

“IPD involves companies like ours in the project development from the start, which doesn’t normally happen in hard bids,” says Mohamed. “It’s often too late to do major changes in hard bid jobs, but under IPD, we were able to reduce the project cost by about $750,000 just by providing valued engineering during the design process and sharing equipment among the subcontractors.”

Growth over the last 28 years has come through acquisition, industry-specific certification to do government jobs and organic growth.

“We’re proud of the fact that we’ve been at the forefront of the digital revolution in the construction industry,” notes Mohamed, “because our teams are focused on finding new ways to collaborate to shorten the time from contract to delivery.”