At 5,000 feet in the air, Patrick Callahan’s plane pitched into a spiral. Suddenly, Callahan lost his sense of direction. Everything was a blur. “I don’t know where I am,” the CompassRed founder told his flying instructor. The pilot, who was teaching Callahan about spin recovery, remained calm. Find the red section on his compass, and all would be well.

Today’s decision-makers often feel similarly disoriented when faced with data. Every search query, every Facebook post and YouTube video contributes to the digital mountain of information.

“Data can be so confusing – it’s everywhere,” says Callahan.

When he decided to start a predictive analytics and insights company, he hearkened back to the basics of navigation. He named the agency CompassRed.

Callahan could have built his business in San Francisco, where he started CompassRed in 2012. But for this adventurous entrepreneur, Delaware was a better choice.

“You can build a massive company in Delaware and service everyone who is two hours away by train – New York, Boston and Washington, D.C.,” he says.

At the same time, he notes, it’s still an affordable place to raise a family.

A Passion for Information 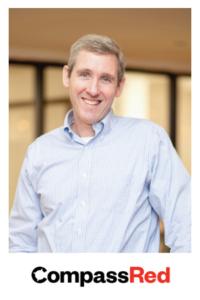 Born in Flint, Michigan, Callahan spent his early life in New Orleans. He moved to Philadelphia to study business and economics at Drexel University, where he met his future wife, Jennifer. After graduating from Widener University School of Law, Callahan practiced for six months.

He felt the opposite way about data and analytics. In the 1990s, he worked for Andersen Consulting, Hesta Data Systems and Proximitree. In 2003, Callahan and Lee Mikles founded the Archer Group, a digital marketing agency, in Wilmington.

Archer – whose clients included Wawa, the convenience store and gas chain – broke new ground. But by 2011, the partners were ready for new challenges. They passed the company’s daily management to their other two partners and, in early 2020, Archer was acquired by Chicago-based Bounteous.

Seeking new opportunities, Callahan and his family packed up a U-Haul and drove across the country to San Francisco. He and his wife took sailing lessons, and he took flying lessons. But it wasn’t all fun and games: Callahan was mining the high-tech area for inspiration.

“I went to Meetups,” he recalls. “I took every meeting I could with people in different careers.”

He even started Meetups for data buffs, one of which attracted 500 people. Callahan was onto something. Gnip, a social media application programming interface (API) aggregation company, paid him to organize similar meetings, including one in London.

In 2011, the West Coast was indeed a hub for tech innovation. But after starting CompassRed, Callahan realized that the East Coast was a better place to scale his business.

“In San Francisco, a startup is a small business in a massive pond,” he says. “The resources were so expensive – salaries were three times the amount.”

In Delaware, he could raise his two children and rub shoulders with influential legislators who had just as much impact as their colleagues in California. Fortunately, the family had kept their Delaware residence.

Initially, CompassRed focused on social media data, which can drive revenue. But real insight comes from combining relevant data, Callahan says. For instance, if you tried to predict baseball fan attendance in the future, you might consider the past attendance given the opposing teams, the game dates – weekday or weekend – the time of day and the division rank.

To sort through these complex piles of digital information requires data analysts, data scientists and data visualization experts, along with technologists. CompassRed currently has a team of about 15 and uses contractors as needed. In 2015, Darren Mahoney, who was formerly with Capital One, became his business partner.

“He and I used to run marathons together and dream about the agency we always wanted,” Callahan says.

The staff is comfortable with algorithms, predictive analytics, machine learning and artificial intelligence.

Data science, for instance, can determine if there is a need for a self-driving car. Machine learning predicts how and when the car would engage in certain functions, and AI controls the car’s action based on those predictions.

Most customers want to know “where the money will be saved or made,” Callahan says. Consequently, CompassRed often works closely with product managers. Frequently, CompassRed helps knit the operation and marketing sides of a business together, whereas, in the past, they functioned in separate silos. The technology, however, does not replace the human decision-maker, he notes.

If all goes as planned, CompassRed will move to CSC Station in Wilmington later this year. Owned by Delaware-based CSC, a global company, the former Pennsylvania Railroad Building is next to the Joseph R. Biden Jr. Railroad Station.

The location will give CompassRed easy access to clients and talent, both of whom might live in Philadelphia. For Callahan, however, Delaware is the perfect place to work, live and enjoy arts, culture and other amenities.

“You can quietly live an exciting life and benefit from some incredible resources,” he says. “I don’t know any place quite like this.”