Just hearing “AstraZeneca” summons visions of lab-coated scientists concocting various tinctures and chemicals in beakers. But the company – particularly its 570,000-square-foot facility in Newark – is also a manufacturing marvel.

The facility, resting on 145 acres, first opened in 1971. Its primary function is end-to-end production. A large proportion of AstraZeneca’s products are manufactured, formulated, packed, warehoused, tested and distributed from this location, which boasts of its 1.4 billion patient interactions supporting 28 brands around the world. Upwards of 50 percent of the multinational pharmaceutical giant’s U.S. sales are distributed from the Newark facility. At present, the site is pumping out 550 million tablets per year. 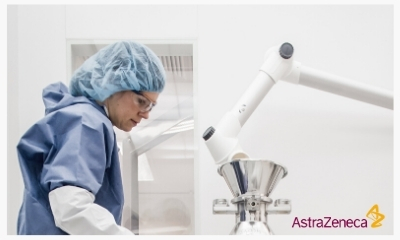 On top of operating a state-of-the-art plant, AstraZeneca has hired a diverse staff of 250 employees. Site leadership is 50 percent female with representation from six countries.

The plant is one of the most important sites in the company’s operation. AstraZeneca, with its global headquarters in Cambridge, England, produces products in major disease areas, including cancer,  cardiovascular, gastrointestinal,  infection, neuroscience,  respiratory, and inflammation. The company also has developed a vaccine for COVID-19.

Although the facility is almost half a century old, a concerted effort has been made to keep up with the times. The Newark site’s principal engineer, John Myers, said that in the last seven years, over $100 million has been invested in upgrading the plant.

“We’ve done a facility transformation geared at efficiency,” said Myers. “We consolidated our packaging halls, put in a central palletizer, added a new 35,000-square-foot formulation space and focused on serialization and aggregation so we can track an individual bottle to a carton to a case to a pallet. The palletizer is especially impressive – all the packaging lines send the finished product up an elevated spiral to another building where six big robot arms place them on pallets. Then 12 AGVs (automated guided vehicles) pick them up and either bring them to the docks or the warehouse.”

Interestingly, the facility has had AGVs to ferry pallets around the plant since the 1980s.

“They were really new technology back then, and I have heard that it kind of freaked people out,” Myers laughed.

During the updates, these vehicles got a facelift, too.

“They used to run along wires on the floor, but we recently changed the motors, and now they use triangulation and are guided by lasers,” said Myers. “Our work on automation has really brought the facility into best-in-class efficiency.”

Efficiency and production are one thing, but AstraZeneca wants to ensure their operation is a good steward of the environment as well.

“Earlier this year, our CEO announced a really aggressive sustainability plan – we’re shooting to be carbon zero by 2025 and carbon negative across our entire supply chain by 2030,” said Myers. “It’s important for us to link sustainable manufacturing to the health of the environment because we’re in the healthcare business. If we can reduce our greenhouse gas emissions, it fits well into our overall mission.”

“Over the past three years, we’ve brought in a lot of energy-efficient fixtures and we’ll have converted over to 100 percent LED lighting by the end of this year,” said Myers. “Soon we’re going to look into large solar power upgrades and a few more projects. Ultimately, we’re hoping to continue to decrease our greenhouse gas footprint, further reduce energy and water consumption and further reduce the waste we have going to the incinerator or landfill.”