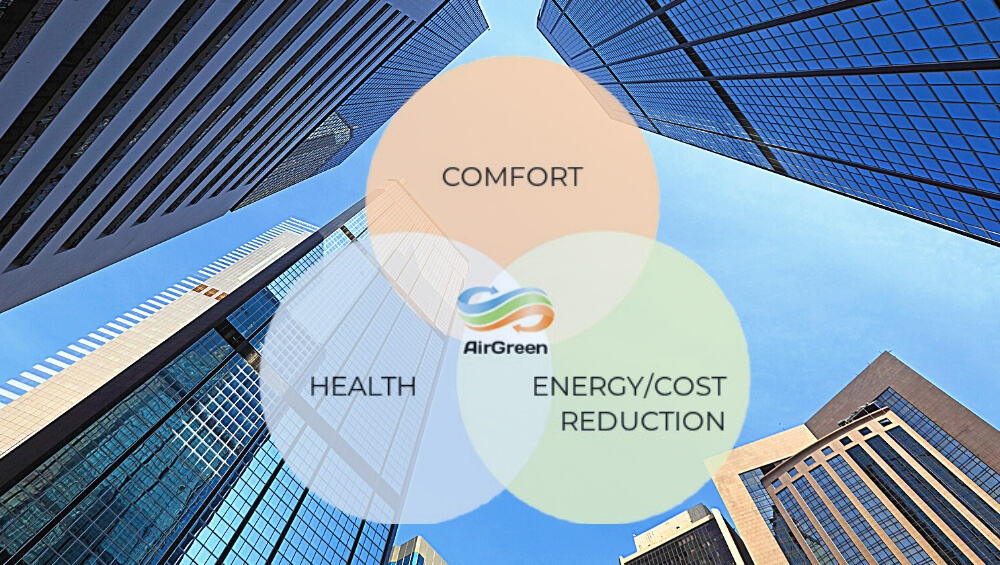 When it comes to air conditioning in the workplace, many people focus on the temperature and the bottom line. But for many industries, humidity and air quality control are just as important as comfort and cost. Enter AirGreen’s liquid desiccant cooling system, which covers all the bases.

The New Castle, Delaware, company’s patented system controls temperature and humidity while cleaning the air — and it does so at a significant savings. The design can save up to 50 percent to 60 percent of the energy that other commercial and industrial systems require.

It’s easy to see why AirGreen is “poised to position itself for a period of substantial growth,” says CEO John Hammond.

From a Great Idea to a Green Company

Founded in 2013, AirGreen is the brainchild of British-born Andrew Mongar, an avid environmentalist and business professor. Since securing funding was no easy task, AirGreen hired Hammond to help the company get up and running. 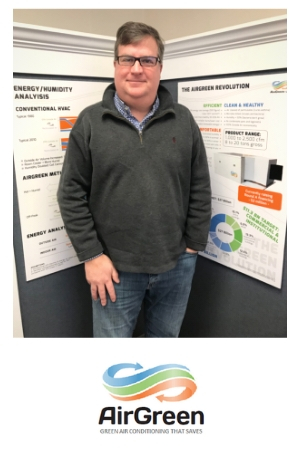 Hammond — who has a bachelor’s degree in chemical engineering from the Georgia Institute of Technology plus executive graduate business classes at both Wharton and the University of Richmond — was no stranger to Delaware. He’d spent 13 years with the DuPont Co. in various roles.

He was also familiar with startups. “I’ve had numerous experiences leading, helping and growing startups over the past 25 years, starting with building a joint venture for DuPont in 1997,” he explains. He then helped startup a chemical industry dot-com and, later, a high-tech composites firm. Most recently, he was a consultant for defense, aerospace and chemical industry clients.

Hammond came on board in September 2018. Six weeks later, Mongar sadly passed away. Despite this loss, AirGreen stayed the course thanks to its committed staff and investors.

AirGreen completed its Series A round of financing in January 2019 and spent the bulk of that year moving the technology toward commercialization while maintaining the energy savings integral to Mongar’s vision. 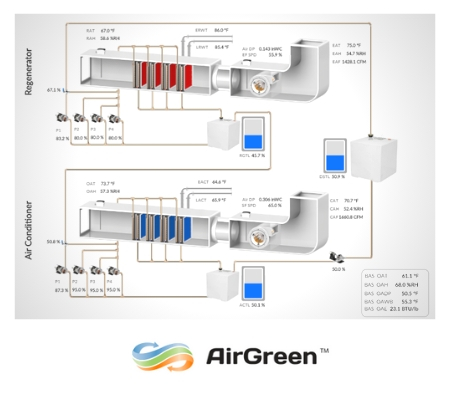 To appreciate AirGreen’s efficiency, it helps to understand how most industrial air conditioners work. To effectively dehumidify the air, these traditional systems drop the temperature to the dew point. Often, they then warm the air back to an acceptable level. The process consumes considerable energy.

AirGreen’s close-looped liquid desiccant system avoids the inefficient rollercoaster process. In four stages, the air conditioner removes moisture from the inbound air via direct contact with concentrated liquid desiccant that circulates through plate heat exchangers. Cool fluid (typically water or water/glycol) removes the heat at each stage. The conditioned air is typically about 60 to 65 degrees Fahrenheit with 40 to 50% relative humidity. (The regeneration process is similar.)

Because the air is drier, most workers do well with a higher thermostat setting, which also saves energy. But the technology’s application goes beyond human comfort.

“While there are broad industrial applications for facilities seeking to lower their energy footprint or provide cool and dry conditioned air, we’ve recently been focusing on applications where humidity control is paramount,” Hammond says.

Humidity control is crucial in other facilities. For instance, AirGreen’s technology is an advantage for schools that close for months at a time. “They get hot and moist, and mold grows,” he says. “The buildings would benefit from being kept dry.”

Because the system captures and neutralizes airborne pathogens, dust, allergens and microbes, it also has applications for hospitals, research facilities and other sterile environments.

“AirGreen is looking forward to demonstrating its unique capability to chemically scrub the indoor air streams of such impurities as mold, viruses and other pathogens in a way that traditional equipment can’t accomplish,” Hammond says. “AirGreen continues to seek local applications for this unique benefit in Delaware schools, hospitals and other workplaces where indoor air quality can be of concern to residents and workers.”

The flexible system can run with heat pumps or renewable energy sources. It can replace an older unit yet work with existing ductwork. Or, it can also pretreat and dry air alongside an established unit.

AirGreen has already demonstrated its ability to provide superior indoor air quality in applications requiring substantial and precise humidity control, Hammond says. “It is doing this at considerably lower energy costs at four applications in Delaware.”

To best service the units, AirGreen is concentrating marketing efforts in the region. After a certification process is in place for HVAC contractors, the company will broaden its reach.

Delaware’s proximity to urban areas on the East Coast has been an advantage from the start.

“Delaware was a great choice for a high-tech business,” Hammond says. “The location provides access to a skilled workforce, and it’s a business-friendly state in general.”

He’s pleased with the Delaware Prosperity Partnership’s unique approach to attracting businesses to the state, and he appreciates the state’s size, which makes it easy to form beneficial relationships. Additionally, the Delaware Angel Investor Tax Credit appealed to AirGreen’s investors.

From New Castle, AirGreen is preparing for a much larger stage. The demand for air conditioning is increasing in India and other countries with emerging economies and a growing middle class.  By 2030, there will be an estimated 4.5 billion room air conditioning units worldwide compared to 1.2 billion today. But the technology has not kept up with the demand for efficiency.

“We intend to provide part of the solution to this global issue,” Hammond says. “We have found that companies are interested as long as new technology provides a tangible return on investment, and AirGreen definitely does just that.”