Ads on the Go – Delaware-Based Carvertise Drives Ahead

Advertising has taken a sharp detour from the days when Madison Avenue was a marketing mecca, and the success of Wilmington, Delaware-based Carvertise is a prime example.

The ad company, founded in 2012, has leveraged the gig economy to create mobile campaigns for such clients as Netflix, 7-Eleven, NASCAR and GlaxoSmithKline. Although based on the East Coast, Carvertise-wrapped cars roam cities and suburbs across the United States and Canada.

Despite the cutting-edge approach, one advertising principle remains: The campaigns must demonstrate a return on investment. To enhance ROI, Carvertise has teamed up with StreetMetrics, an Alabama-based company specializing in measurement for moving out-of-home (MOOH) media. The partnership is another example of how Carvertise founders Mac Macleod and Greg Star are fueled by innovation and aspiration.

Carvertise made the 2020 Inc. 5000 list, one of 11 Delaware companies to make the cut. The business ranked on the magazine’s roster of fastest-growing private companies.

A New Approach to Ads 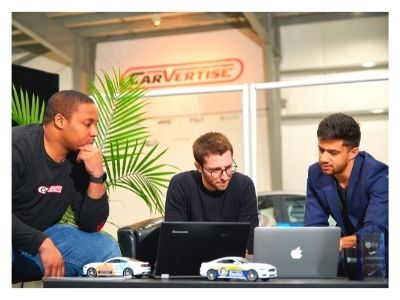 Macleod came up with the idea for Carvertise while contemplating a bus ad at a red light. If advertisers could post ads on taxis, buses and subway trains, he thought, why not consumer cars?

The University of Delaware finance major pitched his idea in an economics class on entrepreneurship. Fellow student and economic major Greg Star was intrigued. “I sent him a text and said, ‘Hey, this is really interesting. Can I help?’”

The new friends discovered that three out of 10 survey respondents were willing to put an ad on their vehicle. They hit the ground running. Macleod went part-time to manage the startup, and Star joined the company full-time after graduating.

By 2015, the partners were recruiting drivers in the Newark/Glasgow area of Northern Delaware area to promote a Shoprite store opening. Wilmington University also came aboard early.

Carvertise topped its 2015 revenue of $210,000 during the first month of 2016. By the end of that year, the company had made “five times” the 2015 figure, Macleod told Philadelphia Inquirer reporter Diane Mastrull, who wrote a national column about the company.

Instead of outsourcing the wrapping, the company began printing the paint-safe, removable ads and applying them on site. “We realized that we needed the in-house product to get better prices for our clients,” Star explains.

For campaigns in cities such as Los Angeles, Carvertise ships a third-party vendor, which wraps the cars.

No matter where drivers are located, they must pass background checks, own newer cars in good condition and drive certain routes.

Each car receives a GPS monitor, which Carvertise taps to help determine the estimated impressions — the number of people who viewed the ad. The algorithm also factors mileage, speed, population density and traffic counts.

The partnership with StreetMetrics takes ROI to the next level for Carvertise. StreetMetrics built its reputation on calculating ROI for the ads on buses, trains, rideshare fleets, taxis, mobile billboards, airport shuttles, bicycles and scooters.

For Carvertise, the StreetMetrics Audience Measurement Engine compares vehicle route data and timestamps to a mobile device database. The goal? Find users in the area who likely saw the ads. As before, vehicle speed is integral to the calculations – but so is the weather. The resulting data allows Carvertise to push digital ads to those targeted mobile devices.

Though the business has felt the effects of the COVID-19 pandemic, not all the news is negative. When people became hesitant about using public transportation, Star notes, they turned to ridesharing programs like Uber in increasing numbers.

Additionally, more people began using food-delivery services and ordering products online – all of which require drivers with transportation. Rideshare cars now comprise up to 70% of Carvertise’s “fleet” in urban areas. For suburban campaigns, the average Joe who drives regularly can pick up some extra cash.

To expand, the team is focusing on key sectors nationwide rather than a specific region. Today, there are 45 active campaigns across the country.

“Our growth has been through our clients,” Star says. “So, we only win when they win.”

The company currently has 25 employees, including Anthony Fuscaldo, director of sales for Philadelphia, a veteran of radio and out-of-home advertising.

“We want energetic people who can connect with drivers and work together as a team,” Star says. “Delaware is perfect for that from a workforce perspective.”

Local colleges and universities are producing people with an appetite for a startup, he adds. What’s more, Delaware nurtures entrepreneurship.

“You can talk to the governor, the state representatives – they’re very accessible and want to help,” Star says. “That should not be understated.”