Renovations will add enhancements to the Experimental Station's lab space along with the construction of collaboration centers for DuPont customers and suppliers. Breen said DuPont will also set aside space for third-party science companies.

"We really want to use it as an incubation center," Breen said.

Breen's remarks came at the Delaware State Chamber of Commerce's 180th annual dinner, held at the Chase Center on the Riverfront. The evening also included the presentation of the Josiah A. Marvel Cup to healthcare advocate Carroll Carpenter.

DUPONT COVERAGE: Read about what led up to the Dow-DuPont merger

A handful of other companies already occupy some space at the 150-acre facility. Chemours, a DuPont spinoff, and Hygenia, a life sciences company that purchased DuPont's food safety diagnostics business last month, lease space at the Experimental Station. Breen said the Dow Chemical Co. will also have workers at the research center after it completes a proposed $130 billion merger with DuPont.

"It's a great environment for collaboration," Breen said, adding DuPont will continue to predominately occupy the Experimental Station.

Once Dow and DuPont consolidate, the newly merged company will split into three separate businesses. Two of those new companies — with focuses on agriculture and specialty products — will be based in Delaware. A third company in the material sciences industry will be based in Dow's hometown of Midland, Michigan.

Breen said the two new companies will have a large presence in the Experimental Station after the spinoffs. Combined, the two Delaware-based spinoffs are expected to generate more revenue than the existing DuPont, according to Securities and Exchange Commission filings. The Agriculture business will have about $20 billion in revenue, while specialty products will produce $13 billion in revenue.

Breen was bullish on the new companies saying they will be "must-own stocks."

"This site even provides an opportunity for former DuPont researchers and scientists to have a modernized space to do research and build companies of their own," Carper said.

Built in 1903, the Experimental Station is the birthplace of DuPont's most profitable products, including Nylon, Kevlar, Tyvek, and the world's first synthetic rubber, Neoprene. About 2,000 workers are at the site, including some who work in administrative and other functions. 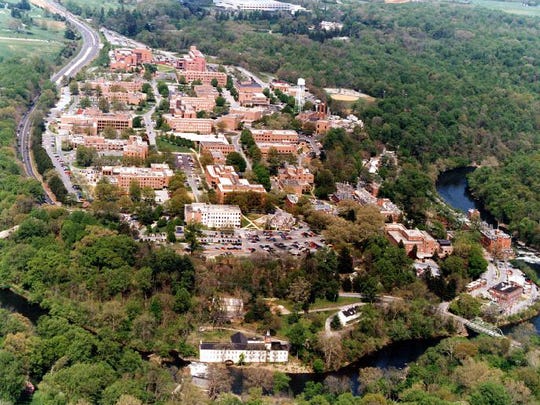 The DuPont Experimental Station on Powder Mill Road in Alapocas is shown in an undated photo. DuPont will spend $200 million to upgrade the facility. (Photo: PROVIDED BY DUPONT)

Last January, DuPont laid off about 200 scientists at the Experimental Station's Central Research and Development division. The layoffs were part of a massive round of job cuts at DuPont that totaled about 1,700 Delaware positions.

At the time, Doug Muzyka, senior vice president and chief science and technology officer at DuPont, said the layoffs were "the next step in the evolution of corporately funded R&D at DuPont."

Separately, Breen announced that DuPont will spend $1.7 billion in research and development in 2017. DuPont spent about $1.6 billion on research in 2016, according to the company's regulatory filings.

"We are going to inch it up next year," he said.

Breen said that 2016 was a strong year for DuPont innovation and resulted in a 250 percent improvement in the company's gross margins compared to 2015's numbers. The company unveiled 660 new products, including an above-ground insect repellent that Breen said was the most rapid new product launch in the company's history.

Other innovation investment plans include a $100 million expansion of the company's probiotics line and the sale of Tyvek at Lowe's Home Improvement stores nationwide.

"I'm really excited about our plans for 2017," Breen said. "You are going to see more announcements from DuPont."

This article was originally posted on the Delaware Business Times at: https://www.delawareonline.com/story/news/2017/01/09/breen-dupont-invest-200m-experimental-station/96372908/